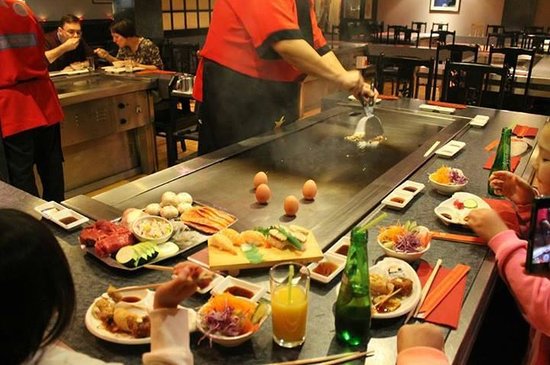 Teppanyaki is a delight for family dinners

Teppanyaki is one of the most popular Japanese culinary styles in which items are cooked flat iron cooktops live for the diners. It’s believed to have started in Japan during the postwar period when Japanese eateries wanted to try out American-style cuisine.

Here is a list of reasons why we suggest you visit Asami for a memorable Japanese dining experience:

Fabulous courses one after the other

A typical teppanyaki meal consists of various fresh items, such as meat, seafood, and vegetables, prepared by a competent, specialised, and experienced chef.

Typically, course menus would include an appetiser known as zensai and soup and salad. The appetiser course usually consists of various items such as seaweed salad or fresh fish carpaccio. Miso soup or a variety of other flavours can be found in soup. In addition, assorted fresh sashimi is occasionally provided at the meal’s start.

After that, there will be a seafood course. In teppanyaki, grilled prawns and scallops are popular seafood alternatives. In addition, premium Japanese seafood, such as black abalone and spiny lobster, is occasionally served.

Then, the main meal consists of a meat dish and a rice dish. Premium domestic meats, including Japanese black-haired wagyu beef like Kobe beef and Matsutake beef, are frequently presented. Meat is never greasy or fatty; many teppanyaki establishments dry-age their meat for extra flavour.

On the other hand, the rice course is typically fried rice or risotto prepared directly on the teppan stovetop. In addition, dipping sauces, for example, shoyu-based, are served with the various dishes to add a bit of extra flavour. Dessert (sorbet, cake, or pastries) is last, followed by coffee and tea.

Fascinating use of equipment and cooking tools

Teppanyaki’s equipment is a crucial component of the dish. The teppan, or flat iron grill, is the heart of teppanyaki. It is considered one of the first inventions made in Japan when modern iron manufacture began. Other delicacies such as okonomiyaki, a savoury pancake, were cooked on teppan, which became popular. Teppan grills are frequently placed tableside, where the chef prepares the food right in front of the guests. The chef commonly uses metal spatulas, grill forks, and huge knives to manipulate the food.

Many people consider teppanyaki more of a theatrical experience than a culinary one. Teppanyaki chefs prefer to show off their dynamic cooking skills in various ways. They like to stuff fried prawn tails into their shirt pockets, slice meat and shellfish with razor-sharp precision, break eggs open with a spatula, and light an onion volcano on fire. The teppanyaki experience is a show that has drawn hungry patrons to the event, sometimes even more than the delicious cuisine.

Teppanyaki is a multi-sensory experience. Not only are the numerous courses of food excellent, but the teppanyaki chefs’ performance at Asami and theatrics truly make the dining experience one to remember at this place.